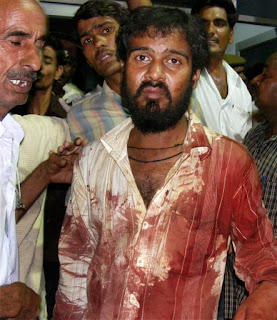 Hang with us or we attempt to kill you?

No wonder he didn't want to chill out with them.

(Not a photo of friends and victim)

NODIA: An engineering student has been allegedly shot at by his three friends here after he refused to hang out with them, according to the police.

Anuj Gautam, a mechanical engineering student, was shot on the right side of his chest on Tuesday night, police said. He was admitted to a nearby hospital, where his condition was reported to be critical.

Three accused in the shooting belong to Gautam's hometown Aligarh and the four were schoolmates.

"Gautam was reportedly bullied by the three constantly and he had begun to distance himself from them," said a police official.

The three friends had resented this and allegedly shot at Gautam after an argument late on Tuesday night.

The police have registered a case of attempt to murder and have sent a search team to Aligarh to trace the trio.

"It's really unfortunate. This is the second such incident in the last 15 days. I think the education system is only responsible for this. We are not able to provide moral education to our kids and the result is in front of us," said Gita Kumar, a counsellor.

Recently, a Class VIII student of a leading Gurgaon school was shot dead when two of his classmates pumped three bullets into him in revenge for the latter's bullying habits.
Posted by Sam at 7:24 AM