Poppa's got a brand new bag ? 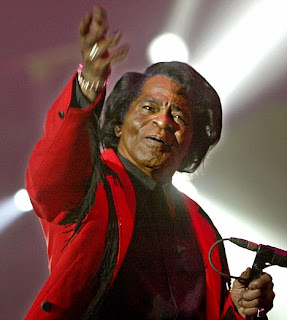 If you have the "King of Soul"'s body please return same.

James Brown's daughter has claimed the singer's body has gone missing from its crypt.

LaRhonda Pettit, 48, alleges the body of Brown, who died in December 2006 aged 73, is being hidden to prevent a full autopsy being carried out.

Ms Pettit said the official cause of death, which was said to be a heart attack brought by pneumonia, is not the real reason behind the Godfather of Soul's passing.

James Brown's daughter believes the singer's body has gone missing from its crypt
She said: 'My daddy's body has disappeared. I have no clue where it was taken, but I need to know where.
'I'm convinced his death was suspicious and I want the people responsible brought to justice.
'The only way to do that is to exhume his body and have an autopsy. I cannot understand why one was never conducted.'

Brown's body was said to have been embalmed following his death, and was reportedly contained in a sealed casket at his South Carolina home
Ms Pettit, who underwent a DNA test in 2007 to prove she was Brown's daughter, believes there were several people involved in Brown's death.

She added to America's Globe newspaper: 'It was common knowledge that my daddy took illegal drugs.

'He was also hooked on various prescription painkillers. At the very least there were enablers who helped cause his death.'

Ms Pettit, who is 99.99 per cent likely to be Brown's daughter, said the singer had a relationship with her mother after meeting her at one of his performances in the 1960s.

She is one of 12 people who came forward following Brown's death claiming to be one of his illegitimate children.

Brown's body is said to have been sealed in a temporary crypt at his daughter Deanna's South Carolina Home while arrangements are made for his permanent burial.
Posted by Sam at 8:49 AM