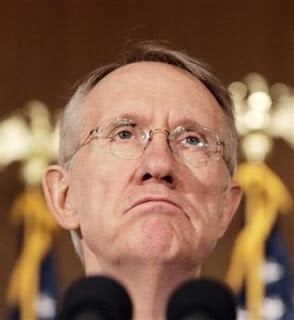 Washington (CNN) -- Senate Majority Leader Harry Reid mistakenly called out "no" Thursday when asked for his vote on the health care reconciliation bill, setting the chamber howling with laughter.

Reid voted the wrong way when the clerk called for his vote, realized his error and quickly changed his vote to "yes."

"He did it again," someone said amid laughter.

His office said Reid made the gaffe because he was so focused on getting health care passed.

The Senate had to vote again on health care after Republicans forced two minor provisions involving student loan funding to be stripped from the bill. The final vote was 56-43 for approval, after which it was sent to the House, which also passed the measure.

The "fixes" bill now goes to Obama to be signed into law.
Posted by Sam at 9:00 AM