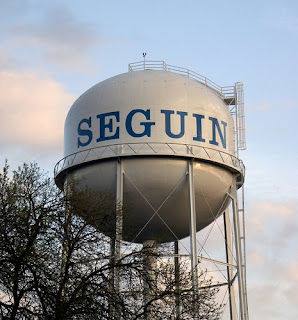 Obviously some sort of domestic quarrel.

My condolences to her family and her children who now stand to lose their father as well if he is found guilty and sent to prison.

My heart goes out to them.

Husband arrested in stabbing death
SEGUIN — A 45-year-old Seguin man was arrested on a murder allegation Monday evening in connection with his wife’s stabbing death.

Precinct 2 Justice of the Peace Edmundo “Cass” Castellanos issued a murder warrant calling for the arrest of Jose Ramos Paz, 45, just after 6 p.m. for allegedly stabbing his wife, Olga A. Paz, to death in their Bauer Street home.

Seguin Police Detective Sgt. Aaron Seidenberger said Olga Paz was found dead at her residence at the intersection of Bauer and New Braunfels just before 8 a.m.

Her husband told officers he’d taken the victim’s children to school and returned to find his wife’s vehicle parked in the driveway with its engine running and its driver’s side door open.

Paz told police he went into the residence, found the woman, and called 9-1-1 from a neighbor’s home, Seidenberger said.

“We have a 31-year-old Hispanic woman found deceased in the home,” Seidenberger said. “We’ve started processing the crime scene.”

Seidenberger did not say where in the home the woman was found or describe her injuries further than to say they were apparent multiple stab wounds.

No weapon had been recovered Monday.

“We’re getting search warrants for the house and the vehicles so we can do everything properly,” Seidenberger said.

Early in their investigation, police stopped short of saying Jose Paz was a suspect in the killing. Paz spent much of Monday being interviewed by Seguin Police Detective Sgt. Curle Price, police said.

“He’s a person of interest, and so far he’s been cooperative,” Seidenberger said. “He’s down at the station, talking to us now.”

Seidenberger also didn’t say whether police had ever been called to the Paz home before.

“We have no knowledge of previous calls,” Seidenberger said. “We’re looking into that. It’s still early in our investigation. We’ve only been here about one and a half hours.”

Precinct 3 Justice of the Peace Edmundo “Cass” Castellanos said a physician had pronounced Olga Paz dead at the scene shortly after Seguin EMS arrived in response to the 7:45 a.m. call. Castellanos said he’d ordered an autopsy that would be conducted today.

The body remained where it was found for much of Monday while police, the Texas Rangers and 25th Judicial District Attorney Heather Hollub and her investigators reviewed the scene. At around lunch time, a mobile crime lab from the Texas Department of Public Safety pulled up at the residence to continue the investigation as news crews, neighbors and family members watched from across Bauer Street.

“The crime lab is going to leave tonight and come back,” Seidenberger said. “They concentrated on the house today, but ran out of light. We’re going to have officers here 24 hours guarding the vehicles.”

Seidenberger said Jose Paz was at the home when officers arrived in response to a 7:46 a.m. call — and the door was open on Olga Paz’s vehicle, which was running. Police marked several spots on the ground next to the vehicle, which was parked on a concrete driveway, and took photos from several angles.

Monday’s stabbing death was the first killing in Seguin this year.

On Oct. 16, 2009, Garland Taylor was shot in the head during a melee on Anderson Street police believe was a confrontation between the Mexican Mafia and the 74 Hoover Crips criminal street gangs.

A month-long investigation resulted in more than a dozen arrests, including those of Michael DelaGarza, 33, and David Buitron Jr., 37, who were booked on allegations of engaging in organized criminal activity and first-degree felony murder.

Seidenberger said the SPD averages about one homicide each year in its service area.
Posted by Sam at 6:48 AM