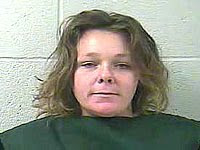 Here at Man o' Law we try to keep you *ahem* a breast of the latest news in criminal justice.

After Toni Tramel, 31, was arrested last Thursday for public intoxication, she was transported to the Daviess County Detention Center in Owensboro. While there, Tramel, pictured in the above mug shot, was directed to change into a jail uniform. But the uncooperative suspect was "too intoxicated to complete the task on her own," so Officer Lula Brown sought to aid her, according to the below incident report.

While in the jail's shower room, Brown told Tramel that she "needed to take her shirt and bra off" before changing into a green jail smock. That is when Tramel "took off her bra, grabbed her breast and squirted breast milk, hitting me in the face and neck region," reported Brown.

Tramel attempted a second lactation assault, "but was unsuccessful," added Brown. Tramel is now being held in the Daviess County lockup on $5000 bond.

As for Brown, a jail press release noted that the officer was successfully able to "clean the bio-hazard off her."
Posted by Sam at 7:24 AM