Shut down this war 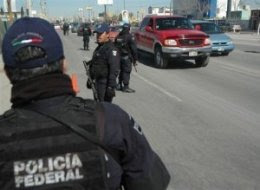 The drug war heats up it seems.

Is anyone, here or in Mexico, really paying any attention?

My bad.  We're too busy trying to get health-care reform rammed through to pay attention to this.

By John MacCormack - Express-News
CIUDAD JUÁREZ, Mexico — Over the past two years, more than 4,000 people have been killed in a bloody drug war here, slaughtered almost daily in their homes and in the streets, at drug clinics and youth parties, at funeral homes and outside schools.

But the killings Saturday of Lesley Enriquez, who worked at the U.S. Consulate and was four months pregnant; her husband, Arthur Redelfs, a corrections officer in El Paso; and Jorge Alberto Salcido Ceniceros, whose wife worked at the consulate, brought the murderous mayhem closer to home in the U.S. than perhaps it's ever been.

Two of the victims were U.S. citizens; one of them a U.S. government employee. The apparently coordinated attacks took place in broad daylight as the three were leaving a consulate children's party. Three children were with them when the assaults took place.