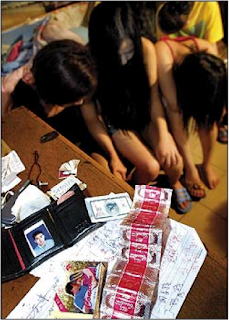 BEIJING: Rural females aged between 10 and 24 seeking jobs in cities have become the main target group for trafficking in China, a joint research has found.The research results were released on Wednesday by the All-China Women's Federation (ACWF) and the International Labor Organization (ILO).

"The increased economic integration and migration have created new opportunities for traffickers to flourish in China," Meng Xiaosi, vice-president of ACWF, said at a press conference on Wednesday.
"China would like to enhance international cooperation in the campaign of anti-trafficking," she said at the launching ceremony of the second-phase "Project to Prevent Trafficking for Labor Exploitation in China" with the ILO.
The project will empower vulnerable migrants to protect themselves, providing them with an education on rights awareness and safe migration, she said.
The project will also facilitate dialogue on trafficking and labor standards, she said.
The Canadian International Development Agency, as a partner, will provide the project $4 million over the next three
years.
The ILO estimates that 2.5 million people are trafficked into forced labor and exploitation worldwide, with more than half occurring in the Asia-Pacific region.
Chinese police freed more than 3,400 children and 7,300 women during a nine-month national campaign against human trafficking launched in early April last year, according to the Ministry of Public Security.
"In China, most trafficking occurs within the context of a massive increase in rural-to-urban internal migrants searching for employment. Poverty is the root cause of trafficking, but not the only factor," Ann Herbert, director of ILO Office for China and Mongolia, said on Wednesday.
She noted other factors including gender preference for boys, strains on education and work opportunities, young people leaving home at a young age, and unscrupulous employers who exploit their vulnerability.
Posted by Sam at 7:03 AM