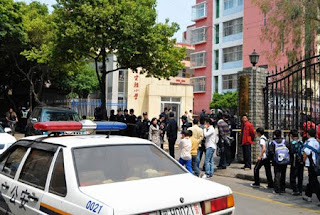 What an unspeakable horror!

Eight children have been stabbed to death by a former doctor at an elementary school in east China, according to Xinhua news agency.


Five other students were injured after the former community medic stormed the building armed with a large knife.

The attacker was identified as Zheng Minsheng, aged 41, believed to have a history of mental health problems, and recently resigned from his post at a community clinic.

Eight children from Nanping City Experimental Elementary School in Fujian province were killed, and five were being treated at a hospital. Six died at the scene. The school was closed after the attack and students were sent home.

Zheng, who was arrested after the 7:20 am attack, was born in April 1968, and was a native of Nanping working at Mazhan community clinic before he resigned in June 2009, according to Huang Zhongping, spokesman with the city's public security bureau.
Posted by Sam at 6:58 AM