Crusin' towards a war? 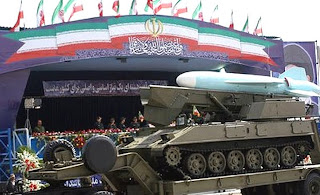 Gen. Ahmad Vahidi told Iranian state TV that the cruise missile, called Nasr 1, would be capable of destroying targets up to 3,000 tons in size. The minister said the missile can be launched from the surface but would eventually be modified to be fired from helicopters and submarines.

The world is already concerned about Iran's military capabilities, especially the implications of its nuclear program. The U.S. and some of its allies, as well as the International Atomic Energy Agency, say Iran is apparently trying to produce nuclear weapons, a charge Iran denies.