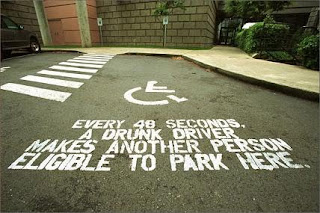 It sure doesn't seem to me that this fellow would be a good candidate for probation.

Authorities said a drunken driver showed up for his sentencing hearing drunk again.Jason Botos, 30, was driven to court by his father and investigators said he was so drunk that he had to be helped inside and wasn't able to make his court appearance."He was unable to get himself out of the vehicle, he was so intoxicated," said deputy Sarpy County attorney Ben Perlman.Investigators said Botos' father asked deputies to help carry his son inside the courthouse.Botos was scheduled to be sentenced for a drunken driving offense in September 2009. He was driving near Highway 75 and Cornhusker Road when his car jumped a curb and smashed into five other vehicles, critically injuring three people."Because he failed to appear for his court appearance, a warrant was issued," said Perlman.Deputies arrested Botos in the parking lot


"He was kind of slumped over. Two deputies assisted him," said Sarpy County Sheriff's Deputy Tina Anderson. "He could not walk on his own."Inside the jail, Anderson put Botos through a breath test."The test showed he was at a 0.43," she said, a level that is more than five times the legal limit.Deputies sent him to a hospital to get checked out and then brought him back to a cell."He was coughing and curled up in a ball," Anderson said.Botos now faces a new charge and more jail time in a case that has authorities shaking their heads."This is a pretty rare case, and extreme case," said Capt. Monty Daganaar of the Sarpy County Sheriff's Office.Botos will be sentenced on Tuesday. Between the new charge of failure to appear and the drunken driving conviction, he could get 18 months in jail.
Posted by Sam at 8:40 AM