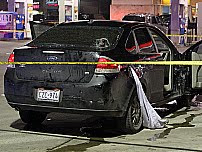 This certainly could have ended up much worse for all involved.

What inexplicable behavior by the folks in the car.

WTF were they thinking?

By Michelle Mondo - Express-News
A trip to get a soda for two police helicopter pilots erupted into a chaotic scene Monday evening at a South Side gas station, with both officers attacked and injured, a woman hit by a car and one alleged assailant shot in the arm.

Two men were under arrest, and a manhunt was under way for a third.

Police Chief William McManus said the injuries suffered by the officers and the woman appeared to be non-life-threatening.