Scaring off the varmints 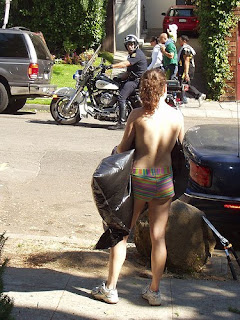 Colo topless gardener complaints prompt new rules
BOULDER, Colo. (AP) -- A woman gardening wearing only a yellow thong and pink gloves has brought neighborhood complaints and new rules from a housing authority in Colorado.
Boulder Housing Partners plans to amend its rules so that tenants cover up when they're outside. Several passers-by told Boulder police earlier this week that 52-year-old Catharine Pierce was topless while tending to her yard. Last year, she was threatened with eviction for gardening wearing only pasties and a thong.
Police responding to Wednesday's reports decided Pierce wasn't breaking any laws.
Robert Pierce said he'll fight changes that would keep his wife from gardening outside topless, which is legal under state and city law.
"They're making a big mistake," he said.
Boulder Housing Partners Executive Director Betsey Martens didn't return a phone call Friday seeking details on how covered residents would have to be.
She told the Daily Camera newspaper that people have complained for years about the couple often going outside wearing only thong underwear.
Robert Pierce said the new rules wouldn't discourage the couple. "We'll stay the way we have to stay," he said.
The City Council is scheduled in April to consider expanding the city's anti-nudity ordinance, but a draft proposal to make it an offense for women to go topless in public was removed.
City spokesman Patrick von Keyserling said the housing authority is a separate entity and that the city can't dictate the agency's rules.
Judd Golden, chairman of the Boulder County chapter of the American Civil Liberties Union, said neighborhoods are generally able to make their own rules for residents to follow. But he said the ACLU does not support limits that are more restrictive than the law.
---
Posted by Sam at 7:52 AM