Nearly 18,000 dead in ongoing drug wars south of the border 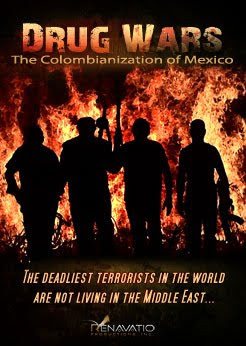 My heart goes out to the families of these two officers of the law.

Just two more victims in an increasingly violent drug war which threatens to get out of control.


MEXICO CITY - The pre-dawn discovery of two bodies cut into pieces and shoved into two black bags brought a tragic end Monday to a search for two missing police officers in the southern state of Guerrero.

One of the victims was a regional commander, the other a state police officer. Notes written on yellow cards were attached to the bags, but police refused to disclose what they said. Drug cartel killers frequently attach messages to bodies.

In the nearby resort of Acapulco, police later found another two mutilated bodies and a threatening message outside the house of the city's former deputy traffic police chief.

The victims were identified as the former deputy chief's nephews, the Guerrero state Public Safety Department said in a statement. Police also found a message threatening supporters of the Beltran Leyva cartel, it said.

Police officers have been targets, and are sometimes complicit, in drug-related killings, which have claimed 17,900 lives since President Felipe Calderon stepped up the drug war in December 2006.

On Sunday, Rodrigo Medina, governor of the northern state of Nuevo Leon, announced that he was firing 81 state police officers suspected of corruption.

Also in Nuevo Leon on Sunday, the police chief of the city of Santa Catarina narrowly avoided being killed by gunmen believed to be connected to drug traffickers.

The assailants attacked a convoy of vehicles carrying Police Chief Rene Castillo Sanchez and other authorities shortly after the arrest of several suspected drug dealers. One of Sanchez's bodyguards was killed and three people in the convoy were wounded, said a police spokeswoman who, under department rules, was not authorized to give her name.

The Mexican military set up a checkpoint between Acapulco and the city's airport Sunday evening after a man was killed in a shootout between gunmen riding in separate vehicles.

The gunbattle followed the deaths of five men who pulled guns on each other during an early morning fight that began as an argument at a wedding Saturday night.
Posted by Sam at 4:31 AM