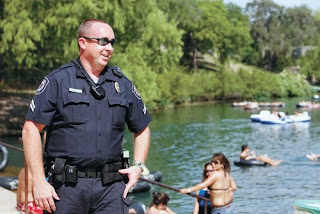 Well, that was quickly done.


Police detain suspect in FM 306 shooting
By Bryan Shettig - The Herald-Zeitung
New Braunfels Police detained a 14-year-old male Thursday in connection with the Monday shooting of a 63-year-old man driving on Farm-to-Market 306.

Police searched the area near Canyon Lake earlier this week and had spoken to two teens who had a gun in the area during the night-time shooting.

Officers arrested one of the teens Thursday on charges of aggravated assault with a deadly weapon, said Lt. Mike Penshorn. Officers then took him to the Guadalupe County Juvenile Detention Center and he was scheduled for a hearing regarding the case Friday morning and may already have been released to his parents.

The Comal County District Attorney’s Office did not return phone calls regarding the case before press time.

“Apparently they were right next to the road and firing in the vicinity of the roadway,” Penshorn said.

Jim Reynolds, who had just moved to Canyon Lake from McAllen, was driving northbound on 306 when a bullet smashed through his passenger window and hit him in the neck. Reynolds said previously that he stopped and flagged down a passing couple that called 9-1-1.

Emergency workers airlifted him to University Hospital in San Antonio, where doctors released him Wednesday with the bullet still in his neck for the time being.

It was unclear Friday what kind of gun the teens had, though Penshorn said it was most likely a small-caliber gun. Reynolds said he was unsure what kind of bullet doctors examined in his neck.
Posted by Sam at 8:07 AM