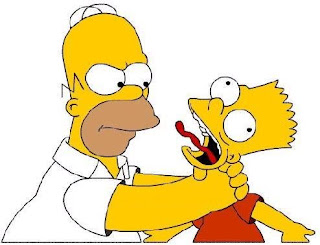 I know teen-age girls can be rough to deal with but c'mon Mom!


My wife also nixed my idea to reprint the article and tape it to our daughter's doors.

All kidding aside this is just tragic.

WHITE PLAINS, N.Y. (AP) - A woman accused of strangling her daughter on a college campus apartment in Purchase, N.Y., told them she did it because the daughter was "disrespectful all the time," according to court papers made public Thursday.

Police accounts filed with a murder indictment quote Stacey Pagli, 37, as saying that Marissa Pagli, 18, had "pushed my last button." Police say Pagli admitted to killing her daughter and also tried to kill herself because she said they were "too much baggage" for her husband.

Stacey Pagli is accused of strangling her daughter Feb. 22 in the family's staff apartment at Manhattanville College. Marissa was a freshman at the school. Her father, John Pagli, was a maintenance supervisor. He found his wife unconscious and his daughter dead.

She said she choked Marissa with her hands and knew she had killed her.

Pagli expressed regret, saying, "I wish I could take it back, but I can't. I can't make it better, she's not here anymore."

She also said she killed her daughter and tried to kill herself because they were "too much baggage" for her husband. "Me and Marissa, we ruined his life," the mother is quoted as saying, without elaborating.

The documents are police accounts of recorded interviews at White Plains Hospital and police headquarters.
Pagli's lawyer, Allan Focarile, would not comment on the indictment or the police accounts.
Pagli tried to commit suicide by cutting her left wrist and hanging herself on a doorknob, the Westchester district attorney's office said. Her arraignment is pending.
Posted by Sam at 6:54 AM