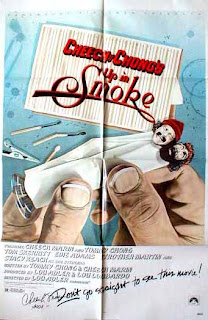 In another vein (no pun intended) I always thought it'd just be a matter of time for government officials to seize upon the idea of legalizing drugs like marijuana and even cocaine and tax the heck out of them to raise revenues.

ALBANY - Senate Democrats are counting on a pot of gold!

They want to legalize medical marijuana as a way to generate nearly $15 million in licensing fees to help plug the state's $9 billion budget gap.

"It is the right thing to do and there is revenue attached to it," said state Sen. Thomas Duane (D-Manhattan). Duane and Assemblyman Richard Gottfried (D-Manhattan) are behind the plan to make it legal for folks with serious medical woes to score limited amounts of weed from state-certified distributors - or grow it themselves.

The Senate still needs to approve the provision, though Dems included revenue projections from the sale of medical marijuana in their 2010-2011 budget proposal. "It's ludicrous," needled Sen. Martin Golden (R-Brooklyn).

Golden and other Republicans said the Democrats' budget proposal is laden with one-time-only gimmicks, including raising $700 million through the refinancing of tobacco bonds first issued in 2003.

The $136.2 billion plan contains most of the spending cuts proposed by Gov. Paterson, but rejects new taxes on cigarettes and sugary sodas. Paterson was pleased the Senate accepted his cuts, but worried their revenues were unrealistic.

"One of the things we're going to have to avoid in this process is creating revenues that aren't real," Paterson said.

Paterson said he was encouraged that Senate Majority Leader Pedro Espada (D-Bronx) has relented on his opposition to placing tolls on the East River bridges to ease the MTA's budget woes.

"Just the fact that he and other senators are considering it is very helpful," Paterson said.

Meanwhile yesterday, a coalition of good government groups reported that most New Yorkers - including city residents - aren't getting their fair share of pork projects tucked into the budget.

The groups found that residents who live in 49 of the city's 64 Assembly districts, and 11 of the city's 26 Senate districts, receive less than the "fair share" or the average-per-district amount doled out on member items.

"The guys who get the most money are the leaders, the ones who hold all the political power," said Blair Horner of the New York Public Interest Research Group.