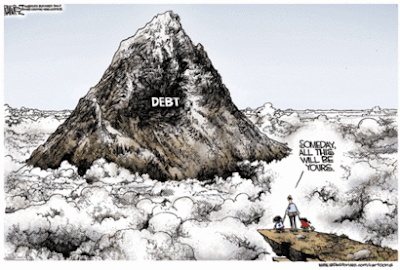 How can our economy withstand this?

By David M. Dickson-  Washington Post
President Obama's fiscal 2011 budget will generate nearly $10 trillion in cumulative budget deficits over the next 10 years, $1.2 trillion more than the administration projected, and raise the federal debt to 90 percent of the nation's economic output by 2020, the Congressional Budget Office reported Thursday.

In its 2011 budget, which the White House Office of Management and Budget (OMB) released Feb. 1, the administration projected a 10-year deficit total of $8.53 trillion. After looking it over, CBO said in its final analysis, released Thursday, that the president's budget would generate a combined $9.75 trillion in deficits over the next decade.

"An additional $1.2 trillion in debt dumped on [GDP] to our children makes a huge difference," said Brian Riedl, a budget analyst at the conservative Heritage Foundation. "That represents an additional debt of $10,000 per household above and beyond the federal debt they are already carrying."