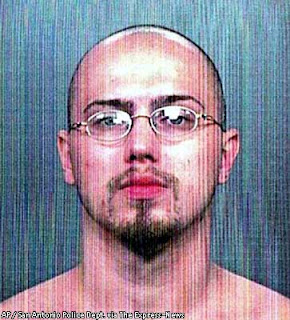 All of this was senseless.

What Maxwell and McFarland did was senseless.  Two men died as the result of their senselessness.

Mr. Maxwell will appear before a higher court tonight for his final judgment, as someday we all will.

Set to die today, killer calls his spree senseless
By Michelle Mondo - Express-News
Looking back, Joshua Maxwell concedes it was all a waste.

The Bonnie and Clyde comparisons, running from the law, the nationwide crime spree and most importantly, the deaths of his two victims: Bexar County sheriff's Sgt. Rudolfo “Rudy” Lopes II, 45, and Indiana native Robby Bott.

It was the robbery and shooting of Lopes 10 years ago for which Maxwell was condemned to die. He's scheduled to be executed today in Huntsville.

“There's really no explanation,” Maxwell, 31, said during a 45-minute death row interview about his crimes. “All the way from the top to the bottom, just senseless.”