Do you know me? 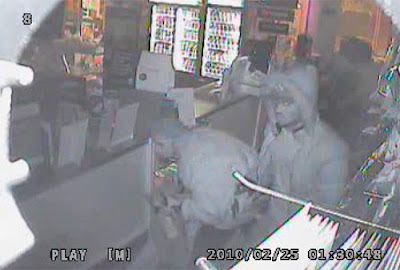 Have you seen or do you know these men?

If you do or have any information please call the non-emergency number at the Seguin Police Department  (830) 379-2123.

Police looking for help in burglary case
SEGUIN — Police working to determine who committed an early morning burglary at a Seguin business late last month have released photos of the men responsible — and are seeking help identifying them.

Seguin Police Chief Kevin Kelso said officers went to the USA Dollar Store located in the 1500 block of East Court Street at 1:45 a.m. on Thursday, Feb. 25 in response to an audible alarm. They arrived to find the glass front door smashed in — but nobody inside the store.

“Two guys bashed in the door to commit this crime,” Kelso said

Investigation revealed both cash registers in the establishment had been destroyed, Kelso said.

Patrol officers notified the business owner of the break-in, and an inventory revealed an unstated amount of cash, cigarettes and cell phones had been taken. Kelso said damage to the door was estimated at about $600, while the value of the ruined registers was placed at $1,600.

Kelso was unsure how the men had selected their target, but noted the pair had chosen a business with valuable, easy-to-move items that would facilitate a fast getaway and perhaps a quick sale. Maybe one or both of them had been customers of the establishment, but police are uncertain whether that’s the case.

“I don’t know whether they were familiar with the business or what,” the chief said. “It’s possible they were or that one of them knew someone who worked there or had information that suggested the business would be vulnerable.”

Kelso urged businesses to take steps to reduce their vulnerability to such burglaries. In this case, he noted, an alarm sounded, but police who responded in moments still were unable to do more than process a scene where a crime had already been committed.

But the loss would have been reduced by at least the value of the cash registers and their contents had there not been money in the cash drawers, and had the drawers been left open so the burglars would have known that without smashing them to gain access.

“Businesses should never leave cash in a drawer after closing for the day,” Kelso said. “If you have to leave it in the establishment for some reason, it should at least be locked in a safe.”

Kelso revealed that the entire incident had been captured on the store’s video security system, and investigators from his department as well as Guadalupe County District Attorney Heather Hollub’s office are reviewing the images. The perpetrators of the break-in were a pair of black men, Kelso said.

Someone knows who committed this burglary, Kelso said — and it’s likely one or both perpetrators is someone who is familiar with Seguin.

Criminals don’t just commit a single offense and then retire, so it is likely the pair could strike again at other businesses or even at their neighbors. The best way to stop them, he said, is to call police with the information they need to make an arrest.

“The suspects have not been identified at this time, and we could use help trying to solve this crime,” Kelso said.

Kelso said the most successful police departments are ones supported by their communities — ones where the public and the police partner in solving crimes.

The community can best help, Kelso said, by supporting his officers and by acting as their eyes and ears on the streets and in their neighborhoods.

“We can’t be everywhere,” Kelso said. “We can’t fight crime by ourselves without the help and support of the community.”

Anyone who knows of people involved in this incident or committing other illegal acts such as selling drugs can provide that information to police secure in the knowledge that it will not be ignored, Kelso said.

Sometimes a tip won’t provide information police can act on, but that doesn’t mean it’s not valuable, Kelso said. Sometimes, it is the final bit of information a detective needs to make a case that takes a criminal off the street and makes a neighborhood more safe.

And anyone who ever sees something suspicious — even if they’re not sure they’re seeing a crime in progress — shouldn’t hesitate to call police immediately, Kelso said.

If it’s possible to do so safely, get descriptions of anybody involved and their vehicles to include a license plate and direction of travel.

“We’ll come out, and we’ll check it out,” Kelso said. “Call us, and we’ll find out whether it was important. If you don’t call, we’re not going to be aware of it. We need everybody’s help to work to our best ability and be most effective.”