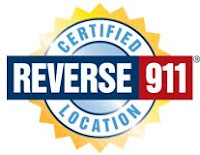 I can understand some folks getting annoyed at getting the early morning phone calls but I think its a great system and I did not know the ability to do this existed.

I think its great; of course however, in the interest of full disclosure I was not one of the folks who got a 1 a.m. wake-up call.

Thousands of local residents were awakened by a late-night call from the New Braunfels Police Department on Monday.

Phones began ringing shortly after 1 a.m. in more than 9,700 homes in New Braunfels on Monday, as the NBPD used its Emergency Notification System to ask for help in locating a missing and mentally disabled 19-year-old woman.

Police said the woman had wandered away from her home, and the potentially “high danger” she was in warranted using the ENS – a “reverse 9-1-1” system provided by Bexar Metro 9-1-1 that automatically calls homes to alert residents in cases of emergency.

Police found the woman at around 2 a.m. in an abandoned building on Rueckle Road, less than a mile from her home. She was unharmed.

“It was a very serious situation,” said NBPD Lt. Mike Penshorn. He said a dozen officers and a Department of Public Safety helicopter searched for the woman for an hour before the police decided to use reverse 9-1-1. “We had already been looking for a long period of time, and with her having the mental capacity of a small child, she could have been in significant danger.

“Unfortunately, it was late at night, but I don’t know how we would have handled it differently.”

Penshorn said the system has been in place since 2002, and has been used on several occasions to seek help in locating missing persons.

Police said the citizen feedback did not lead to any tips Monday, because the woman was located by NBPD officers soon after the calls were patched through to thousands of local homes.

“Was it an inconvenient time, yes, but in a situation like that you want to use all the tools at your disposal,” said City Manager Mike Morrison. “If it were my daughter, I’d want to know that they were doing everything possible to make sure she was safe.”

Some who received the post-midnight call questioned whether it was an appropriate use of the city’s emergency system.

“Why did I need to be woken up at 1:30 in the morning?” asked Kelly, a resident who didn’t want her last name to be used for this article. “I thought the reverse 9-1-1 was supposed to be used for bigger emergencies, like floods or tornadoes, not Amber Alerts.

The system called everyone living within a five-mile radius of the woman’s address on Rueckle Road.

“I could understand if you want to call in the daytime to find a missing person, but not at two in the morning,” said resident Emiliano Zapata. “I called them today to tell them I want my name off (the reverse 9-1-1) list. I don’t want to go through that again.”

Penshorn said most residents who answered the phone were helpful, with a few saying they looked out their windows to aid in the search.

“That’s what the system is there for, and it’s really a very valuable tool for us in a number of situations,” he said.
Posted by Sam at 6:58 AM