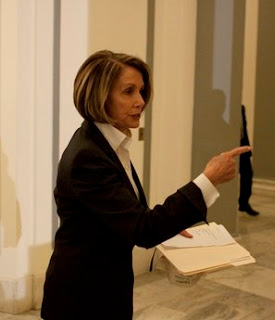 I guess I am simply naive.

I thought to become a law the bill must be passed by vote Andy McCarthy points out in the National Review:

"Interesting Examiner post by Mark Taspcott, drawing on the work of Amy Ridenour of the National Center Blog. They point out that the in Clinton v. City of New York (1998), in which the Supreme held the line-item veto unconstitutional, Justice Stevens's ruling explained that for a bill to become law, both Houses of Congress must vote on precisely the same text, and it must then be signed into law by the president. As they quote the decision:


If one paragraph of that text had been omitted at any one of those three stages, Public Law 105—33 would not have been validly enacted. [Emphasis added] If the Line Item Veto Act were valid, it would authorize the President to create a different law - one whose text was not voted on by either House of or presented to the President for signature.
Something that might be known as 'Public Law 105—33 as modified by the President' may or may not be desirable, but it is surely not a document that may 'become a law' pursuant to the procedures designed by the Framers of Article I, Section 7, of the ."

From a post on the blog "The Volokh Conspiracy" by Jonathan H. Adler:


"Former federal judge Michael McConnell, of Stanford University, considers the constitutionality of the so-called “Slaughter Solution” — a proposal to allow the House to pass both the Senate health care bill and proposed reconciliation amendments in a single vote.


To become law—hence eligible for amendment via reconciliation—the Senate health-care bill must actually be signed into law. The Constitution speaks directly to how that is done. According to Article I, Section 7, in order for a “Bill” to “become a Law,” it “shall have passed the House of Representatives and the Senate” and be “presented to the President of the United States” for signature or veto. Unless a bill actually has “passed” both Houses, it cannot be presented to the president and cannot become a law.To be sure, each House of Congress has power to “determine the Rules of its Proceedings.” Each house can thus determine how much debate to permit, whether to allow amendments from the floor, and even to require supermajority votes for some types of proceeding. But House and Senate rules cannot dispense with the bare-bones requirements of the Constitution. Under Article I, Section 7, passage of one bill cannot be deemed to be enactment of another.

The Slaughter solution attempts to allow the House to pass the Senate bill, plus a bill amending it, with a single vote. The senators would then vote only on the amendatory bill. But this means that no single bill will have passed both houses in the same form. As the Supreme Court wrote in Clinton v. City of New York (1998), a bill containing the “exact text” must be approved by one house; the other house must approve “precisely the same text.”

These constitutional rules set forth in Article I are not mere exercises in formalism. They ensure the democratic accountability of our representatives. Under Section 7, no bill can become law unless it is put up for public vote by both houses of Congress, and under Section 5 “the Yeas and Nays of the Members of either House on any question . . . shall be entered on the Journal.” These requirements enable the people to evaluate whether their representatives are promoting their interests and the public good. Democratic leaders have not announced whether they will pursue the Slaughter solution. But the very purpose of it is to enable members of the House to vote for something without appearing to do so. The Constitution was drafted to prevent that."

After laying the groundwork for a decisive vote this week on the Senate's health-care bill, House Speaker Nancy Pelosi suggested Monday that she might attempt to pass the measure without having members vote on it.

Instead, Pelosi (D-Calif.) would rely on a procedural sleight of hand: The House would vote on a more popular package of fixes to the Senate bill; under the House rule for that vote, passage would signify that lawmakers "deem" the health-care bill to be passed.

The tactic -- known as a "self-executing rule" or a "deem and pass" -- has been commonly used, although never to pass legislation as momentous as the $875 billion health-care bill. It is one of three options that Pelosi said she is considering for a late-week House vote, but she added that she prefers it because it would politically protect lawmakers who are reluctant to publicly support the measure.