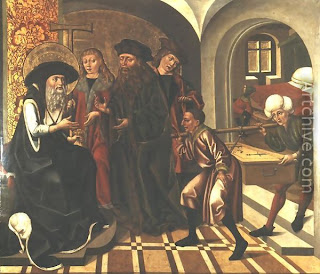 This is pretty low down and despicable.

I mean really?  If this were a person in true desperate need the church probably would've helped them, unless this was stolen to purchase drugs or something like it.

Seguin church has its Sunday offering swiped
SEGUIN — The congregation at a local church has learned not everybody understands the 10 Commandments — particularly the one, “Thou shalt not steal.”

Seguin police are investigating a burglary believed to have occurred late Sunday or early Monday at the office of First Presbyterian Church located in the 300 block of North King Street.

Police Detective Lt. Jerry Hernandez said church employees arrived at work at 8 a.m. Monday to find someone had broken in and riffled through cabinets and drawers until they found a bag containing the congregation’s Sunday offerings.

First Presbyterian Pastor Carl McCauley reported someone had chiseled their way in through an outside door and kicked in the louvers on the office door.

“It was apparent when my vestry assistant came in,” McCauley said of the burglary. “The door was open and the cupboard doors were open.”

The only thing known taken in the incident was the bag, which McCauley said contained mostly checks as well as a modest quantity of cash.

“Churches are not exempt,” McCauley said. “I’m deeply disturbed that this has happened. I take it to be an act of desperation. Most people would have left the checks.”

Just in case, McCauley said members of the congregation who submit their offerings by check have been notified of the theft.

“We wanted to notify them so they could cancel the checks if they like,” McCauley said. “I would emphasize we’ve taken immediate steps, and there will never be cash or checks in there overnight again.”

The situation, the pastor said, is an unfortunate one.

“I don’t want to make this into a large occurrence, but we do have property that was damaged and an offering that was taken,” he said.

Police Chief Kevin Kelso was left shaking his head at the news of the burglary.

“I can’t think of a more sacred place in our world to steal from,” Kelso said sadly. “It takes a very desperate person with very questionable character to commit such a crime.”

Hernandez said police are working to determine who committed the break-in and see that they get at least earthly justice.

“If anyone who made an offering Sunday at First Presbyterian learns that anyone else has cashed their check, we’d like to hear from them,” Hernandez said.