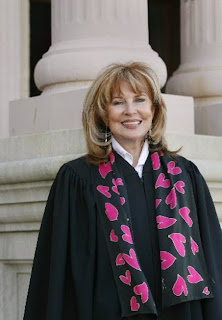 I didn't do very many weddings and I didn't charge for weddings I performed in chambers or in the Courtroom because I felt it was part of my duties.  Many times I gave the wedding fees to the couples as a gift if I went out to do one, particularly if the folks weren't well off.

That's an average of almost 50 weddings a week between the two of them, according to the county clerk's marriage license records.


No other elected judge in the county even came close to the 1,307 weddings Canales performed or the 1,244 ceremonies conducted by Tanner.
Justices of the peace who have traditionally been the ones to handle the non-church wedding business
recorded only a few hundred each.