OMG! Look out! It could be loaded. 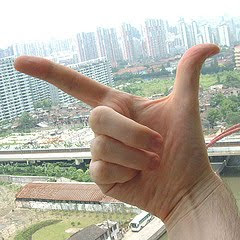 I'm sorry but I think someone at the school has lost their collective mind.

IONIA -- To the little boy's mother, it was just a 6-year-old boy playing around.

But when Mason Jammer, a kindergarten student at Jefferson Elementary in Ionia, curled his fist into the shape of a gun Wednesday and pointed it at another student, school officials said it was no laughing matter.

School officials allege Mason had displayed this kind of behavior for several months, despite numerous warnings.

"I do think it's too harsh for a six-year-old," said Jammer, who was previously warned that if Mason continued the practice he would be suspended. "He's six and he just likes to play."

Jammer says her son isn't violent, and there are other, more effective ways of teaching him not to make a gun with his hand.

"Maybe what you could do is take his recess away," suggested Jammer, adding her son doesn't have toy guns at home.