No amount of money can compensate them 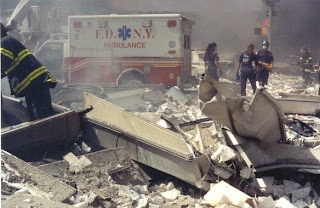 I have a friend who was a NYFD EMT on 9/11. He actually went missing for 24 hours and he lost many friends.

He also suffered severe lung problems and was medically retired while he was in his late 30's.

His medical retirement isn't nearly enough and I hope this matter will resolve soon for his, and his family's sake.

U.S. District Judge Alvin Hellerstein on Friday rejected a legal settlement that would have given at least $575 million to the victims, saying the deal shortchanged ground zero workers whom he called heroes.
"In my judgment, this settlement is not enough," said U.S. District Judge Alvin Hellerstein, who delivered his pronouncement to a stunned gallery at a federal courthouse in Manhattan.