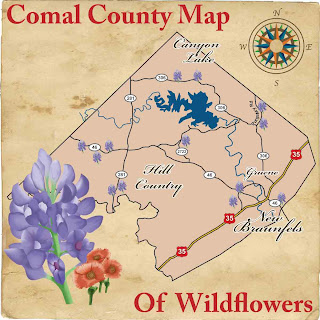 I sure did miss them last year.

Experts expect great season for Texas flowers
By Eric J. Weilbacher - The Herald-Zeitung
Botanists and other flower experts anticipate a remarkable wildflower season in Texas this spring, prompted by the heavy rains from the El Niño weather system that brought most of the state out of a drought.

“If you look at precipitation records in an El Niño year, somehow that translates into a good wildflower season,” Waitt said. “We see the evidence of that here (in Austin) and we’ve had reports off Highway 46 near Texas Lutheran University.”

The diversity of what will be spotted this year is as diverse as the landscape of the Texas Hill Country itself, with large clusters of bluebonnets spotted up near Brenham off of Highway 290, to Redland Road and Highway 281 in San Antonio.

The Texas Department of Transportation tracks more than a dozen of Texas’ favorite wildflowers.

Through another Web site, Wildflower Sightings, users may sign in and add a quick note about where they recently spotted wildflowers.

Experts are not entirely sure where they will show up first because of last year’s drought.

“Last year was such a bad year,” said John Siemssen, past president of the Native Plant Society of Texas. “Last year, (Native Plant Society members) were planning on a trip down to Cuero, where they say they are the capital of wildflowers, and Cuero cancelled because (there was not a significant amount of flowers to be seen).

“This year, I’ve been seeing bluebonnets all over the place. Really Farm-to-Market 2722 down to Highway 46 and other major Farm-to-Market roads should have something.”

Siemssen said he and his wife planted wildflower seeds last year, but many remained dormant because of the drought. Those that did bloom were eaten by deer.

Forecasting the wildflower season can be tricky, but Waitt is confident it will be a good one. A sudden heat wave and return to last year’s record high temperatures would quickly wipe out many of the flowers.

“With rainy days and lots of sunshine in between, that could be ideal,” she said. “If it climbed up to 106 (degrees) tomorrow, what happens is more of the flowers in the sunflower family (like Indian paintbrushes) that are more drought adapted and heat-tolerant (will predominate).”
Posted by Sam at 6:53 AM