Why is this convicted man sitting on Death Row smiling? 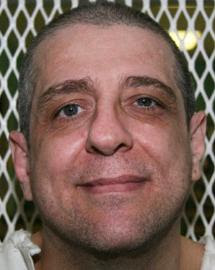 You'd be smiling too at receiving a last minute reprieve.

I'm glad that his execution was halted.  Test the evidence.  If its his then he's outta here and properly so.

If not, we didn't execute someone who may not have committed capital murder.

Either way isn't it a win-win situation for all concerned?

By Allan Turner - Houston Chronicle
The U.S. Supreme Court stopped the execution Wednesday of Henry Skinner, just one hour before he was to be put to death for the 1993 murders of his Pampa girlfriend and her two adult sons.

The stay will remain in effect until the high court rules on a second petition filed by Skinner's attorneys asking for a review of an appellate court decision denying a request for DNA testing of bloody knives, material beneath the dead woman's fingernails, rape kit samples and other items from the murder scene.

Skinner's request for testing was denied because it was filed as a civil rights claim.