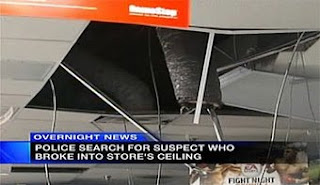 Has it really come down to this? :


"Any bets that he already
has been contacted by a lawyer? "son, it's not your fault the
store owner didn't have the AC unit better secured, and a warning sign
about falling, and poor lighting inside where you fell, and the rescue
squad had to go down through the roof to give you aid and you thought
the store was open and wanted to make sure the AC was running so you
wouldn't get hot inside...."  - Quote by righton


A suspected burglar was hospitalized under San Antonio police supervision after he was knocked unconscious when he fell from a building's ceiling early Sunday morning.

The man, whose name has not yet been released, was taken to University Hospital after officers found him lying on the floor of a Northwest Side store around 2 a.m. Sunday, according to a San Antonio Police Department incident report.