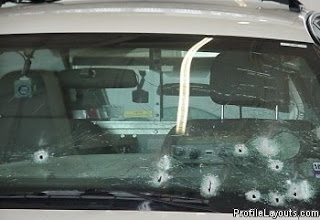 Another shooting by a police officer at a car that was driving at him.

I don't know, is it the heat? Why would folks try to run down armed officers? Okay he was off-duty apparently but I'll presume when he broke up the theft he id'ed himself. Even if he didn't you are driving at someone pointing a gun at you.

I guess she may have watched one too many Die Hard movies.

Speaking of the heat the radio this morning talked about the fact that with no rain and the relentless heat, 32 or so 100+ degree days so far and its not August yet, that he expect folks to snap soon and do crazy things like fight in parking lots and the like.

With mothers decapitating their babies we may have reached it.

An off-duty San Antonio police sergeant fired several rounds at two people at an East Side beauty supply store Sunday after a woman allegedly tried to steal items from the store and then charged the officer in a maroon vehicle, authorities said.

It was not known at the time if anyone was hit, but when a woman with multiple gunshot wounds was brought in to the Guadalupe Regional Medical Center around 5 p.m., she was linked to the San Antonio case, authorities said.

Seguin Police Sgt. Kado Cato said the woman, whose name was not released, was shot four times and was taken from the Seguin-area hospital by helicopter to Brooke Army Medical Center.

A spokesman for the San Antonio Police Department confirmed the woman was located in Seguin but did not add any details.

The shooting occurred around 2:30 p.m. at Black Fox Beauty Supply in the 900 block of South W.W. White Road, after the owner of the store saw a woman in her 50s taking merchandise, Chief William McManus said. McManus declined to identify the sergeant, a 22-year veteran with the San Antonio Police Department.

The woman was with two men inside of the store, McManus said.

“The off-duty sergeant tried to intervene, and there was a physical and verbal altercation,” the chief said.

All three people got out of the store, then one man ran away from the store and the woman and the other man got into a maroon Ford Taurus, police said.

Once outside the store, McManus said, the off-duty sergeant found himself in front of the Taurus. The woman then charged at the sergeant, who responded by firing shots at the windshield of the car.

All three suspects evaded arrest, and surveillance cameras didn't capture the license plate number of the vehicle because of glare from the sun, McManus said. The sergeant is on administrative leave pending investigation.

Cato said his department received a call for the gunshot victim who had been brought to the hospital by her sister. It did not appear that the sister had any idea that her relative was a suspect in the earlier incident, Cato said. Apparently, the woman who had been shot, in her mid-50s, gave the hospital a different name than the woman's sister gave police.

The woman told police she was shot while she was driving on Interstate 10, so Seguin authorities contacted Bexar County to check out the story. SAPD who then contacted Seguin, Cato said.

Both women are from San Antonio, Cato said, and the two departments were piecing the stories together.

Cato said the Ford Taurus was not recovered at the hospital, and it was possible the man who was with the woman at the time of the shooting still had the car, Cato said.