Its now officially the silly season in the new Administration 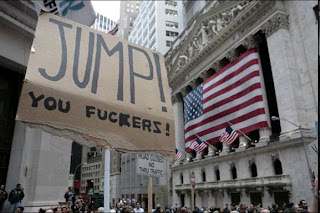 Well, there ya go.

Its done and over with the economic downturn and free-fall is officially over now.

Oh wait, maybe the number of folks looking it up dropped because they lost their jobs and can't afford to continue with their ISP's?

Hmmmm? Could be true too. Just as much as you think the decrease in Google searches means the economic free-fall has ended.

Of all the statistics pouring into the White House every day, top economic adviser Larry Summers highlighted one Friday to make his case that the economic free-fall has ended.

The number of people searching for the term “economic depression” on Google is down to normal levels, Summers said.

Searches for the term were up four-fold when the recession deepened in the earlier part of the year, and the recent shift goes to show consumer confidence is higher, Summers told the Peterson Institute for International Economics.

Summers continued the administration’s push-back against critics of President Barack Obama’s handling of the recession, defending the economic stimulus package against Republicans who have tried to paint the program as a failure because it hasn’t stemmed the unemployment rate.

“We pledged at the time the Recovery Act became law that some of the spending and tax effects would begin almost immediately.,” Summers said in prepared remarks. “We also noted that the impact of the Recovery Act would build up over time, peaking during 2010 with about 70 percent of the total stimulus provided in the first 18 months. Now, five months after the passage, we are on track to meet that timeline. “

Summers rattled off a list of accomplishments of the stimulus package:

“More than $43 billion in immediate tax relief has reached households and businesses. Another $64 billion has been channeled into the economy through aid to state and local governments, expansions in social programs, and spending on education, housing, and transportation projects. In addition to the amount that has already been paid out, another $120 billion in spending has been obligated by the federal government and is on track to begin working its way into the economy.”