Laid to rest, but not forgotten 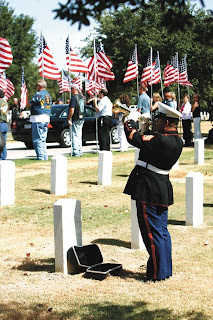 Rest assured, you will not be forgotten.

Many held U.S. flags, and one gentleman brandished a large Marine Corps flag as the funeral procession left Zoeller Funeral Home about 9:30 a.m.

Firefighters and police officers directed traffic while others lined the streets.

Forty-one members of the Texas Patriot Guard Riders rode their motorcycles in the procession, and more than 20 others waited at the cemetery. They also brought large U.S. flags that members of Blue Star and Gold Star organizations held while lining the winding road inside the cemetery.

The Marine Honor Guard did not seem to sweat or flinch as it assisted in the burial despite the rapidly rising morning heat. In the somber atmosphere, the bugler pierced the air softly with a blue but proud tone that answered the 21-gun salute that preceded it.

The outpouring of community support Monday mirrored Sunday’s vigil along the route where Lara’s remains traveled from Randolph Air Force Base to New Braunfels.

“The ride bringing Brandon home from Randolph showed an outpouring of support,” said Charles Rathgeber, deputy state captain of the Texas Patriot Guard Riders and a Blue Star dad. “People stood all along [Highway] 78 and [Farm-to-Market] 3009... it was incredible; it was one of those rides” that makes a lasting impression.

After the funeral, Brandon’s uncle, Dionicio Torres, said, “It was good to see all the support out there... to see all the flags... you don’t always get to see how the community comes out.”

Sgt. Keith Berry, who wrote to the Herald-Zeitung to describe the events surrounding the transport of Lara’s remains from Kuwait to Qatar, wrote in a follow up, “I have never experienced anything like this as long as I have been in the military. I must say that everyone aboard the flight was moved by this experience as well.”

Berry is not a member of the Honor Guard or Mortuary Affairs. In fact, he and many other service members on the plane were on their way to Qatar for a few days of liberty. It was an unusual circumstance that Lara’s remains had to be flown in that manner, but those aboard were more than glad to escort him from a C-130 to the C-17 that brought him home, Berry said.

“As I write this letter to you, I noticed a soldier from my home town of Duncan, Okla., was killed in Afghanistan...,” Berry wrote. “My hometown is not large. I know how your community will be affected as my hometown will be devastated over the loss of our soldier as well. We must always remember the fallen service members.”

Governor Rick Perry announced that flags were to be returned from half staff to full staff once Lara’s burial was complete Monday.
Posted by Sam at 6:16 AM