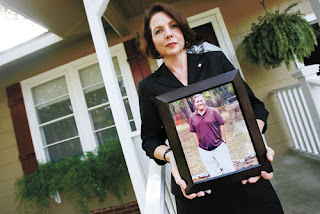 Lest we forget, some battle wounds linger only to kill later.

Thank you for your service to your country and community Colonel Rivas.

My heartfelt condolences to his family.

Rest in Peace Colonel. It was and is men like you and Corporal Lara that stand at the ramparts that make this country great.

Family: Injured vet was devoted to country
By Scott Sticker - The Herald-Zeitung

Colleen Rivas sat with family and friends around an intimate table at St. Peter & Paul Church Tuesday afternoon, drawing from a well of memories of a man who was a husband, a father and a friend.

The 53-year-old man died July 15 after a three-year struggle to recover from head injuries suffered from an Oct. 12, 2006, mortar attack. His wife, Colleen Rivas said he sustained eight concussions from the attack.

“He’s done more in his short 53 years than any other man can even dream to do in a whole lifetime,” Colleen Rivas said.

According to his obituary, he participated in military operations in Africa, Bosnia, Kosovo, Afghanistan and Iraq. As lead engineer for Army North, he was awarded the Legion of Merit and the Purple Heart.

Son Brian Rivas, 21, said, “He was a great man. He did a lot that no one else could even hope to accomplish.”

“He always put duty and his country first...” she said. “He never wanted to send a younger soldier in to do what he knew he could do ... He always wanted to do more.”

He stayed busy when he was on leave and after he retired too, she said.

“Everybody knew Ray was always moving at 100 miles per hour,” she said. “He was always doing something to stay occupied ... He would be fixing up houses or landscaping or building fences ... just anything to keep busy. I think he did it to take his mind off his injuries.”

She noticed her husband’s behavior changed dramatically after the injuries, she said.

“He was like two different people...” she said. “When he came back (from Iraq), we had to re-teach him everything ... He wrote like a second grader ... He couldn’t add or subtract. He had to relearn so much.”

“This was a man with a master’s degree in engineering,” Brian said.

Doctors told Colleen her husband would be in a nursing home by 2011. His death came as a shock, she said.

Raymond Rivas was found dead in his car outside Brooke Army Medical Center’s emergency room on July 15, Colleen said. He was driving to the hospital to participate in a sleep study program.

“It was just totally unexpected. You never expect to get a call like that,” she said. “You kind of prepare yourself for men in uniform coming to your door delivering this kind of information, not a call from a chaplain at 12:15 a.m. from (BAMC).”

Neighbors brought food to the family and tied red, white and blue ribbons on trees around the neighborhood Tuesday. Colleen Rivas said the community and the Army reached out to her family.

Colleen and Raymond Rivas have two daughters, a son and a grandson.