Preying on the good times 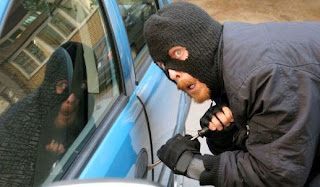 Its the summer and tourists abound.

So apparently too, thieves that prey on the public.

Please store your valuables in your trunk and lock your cars.

A rash of vehicle burglaries in the past few months has New Braunfels police department stepping up patrol efforts in certain areas of the city and asking citizens to take extra precautions.

Officers will tour neighborhood streets in response to rising vehicle thefts and leaving “report cards” under windshield wipers rating the security of vehicles, police said in a press release.

“A lot of people leave valuables in their car,” Chief Ron Everett said. “They leave their cars unlocked, and they leave them in secluded areas. They have a perception they are safe, and that is not the truth in any community.”

Langtry Village apartment complex near Interstate 35 and vehicles along Morningside Drive have been the most recent targets, Lt. John Wells said. Police have increased their presence in those areas, but Wells said this often pushed criminals into other neighborhoods.

Officers will mark on bright orange pamphlets whether the vehicles were “easy” or “hard” targets. The officers will observe certain aspects of the vehicles that make them easy targets and mark them on the pamphlets. Valuables or keys left in plain view, open windows and unlocked doors will be noted. The pamphlets then will be left as reminders to owners to secure their vehicles.

If police find keys inside the vehicles, they will knock on residents' doors to let people know.

More than 25 percent of stolen vehicles had keys left in them, according to the department Web site.

“The three main words to remember are lock, take and hide,” Wells said. “Lock your vehicle, take your keys with you, and hide all your valuables.”

Vehicular burglaries are often a crime of opportunity, and the presence of anything valuable in sight is all the enticement a burglar needs, Everett said.

“Somebody that might not normally break a window or punch out a lock is liable to take that opportunity if they see a laptop or GPS system,” he said.

Cell phones, Mp3 players, and radio faceplates are commonly subject to theft because they are often left in plain view.

The rise in thefts is not unexpected considering the population boom in New Braunfels. Everett and Wells said criminals who become too recognizable to law enforcement in Austin and San Antonio will move their operations to smaller areas.

“This is not the quiet community it was 10 years ago,” Everett said. “The population is now 53,000 and growing, and we have transient traffic of 70,000 a day up and down Interstate 35. We are between two large metroplex areas, and so we are not immune to (crime).”

In addition to increasing patrols, the police department is educating citizens on how to prevent crime through the Safe Communities - Connected Neighborhoods initiative, launched in May.

Everett said the initiative was a comprehensive effort to increase partnerships between the community and police.

Residents could make their homes safer by installing outdoor lighting, trimming shrubs and trees near windows, locking doors and keeping garage doors down, he said

“We need the citizens to be very observant, take general crime prevention techniques, to watch out for their neighbors and be aware of who is coming and going in their neighborhoods,” he said. “The more we do as a community the more impact we can have on crime.”
Posted by Sam at 6:29 AM