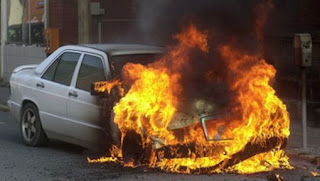 The Judge decided to give the deferred adjudication probation sentences.

Understandable due to their age and lack of criminal history. I sincerely hope they take advantage of the opportunity the judge gave them to straighten out their lives.

Two teenagers stood in court Thursday after igniting downtown New Braunfels a year ago to the day.

Steel gave Spencer deferred adjudication, a $5,000 fine and 240 hours of community service. She must also complete an in-jail day treatment program. The 45-day program is designed to deter destructive behavior and the use of drugs and alcohol, Comal County Assistant District Attorney Steve De Lemos said.

Deferred adjudication means she will be supervised, but the court did not enter a verdict. If she violates any of the court orders or commits any crimes, she could enter probation or receive jail time, De Lemos said.

“The judge felt like since Spencer didn’t have any criminal history or background, deferred adjudication was the right way to go,” he said.

De Lemos said between the two, they will pay restitution of about $12,500 to the victims.

Another teen, Cody McNabb, also was arrested in connection with the vehicle arsons. According to court records, he entered a plea of guilty for at least one count of arson of a vehicle Thursday. His punishment hearing is not set.