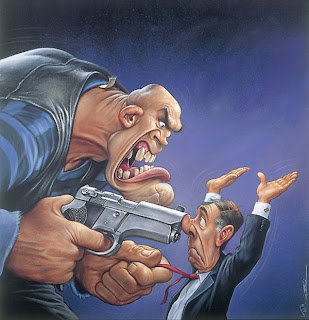 Really it was a spur of the moment thing??

That would really persuade me to want to give you probation.........NOT!

Particularly when you committed the armed robbery while you were on probation for theft.

Defendant asks jury for leniency
By Scott Sticker - The Herald-Zeitung

A 20-year-old man begged a Comal County jury for forgiveness and leniency Wednesday in the third day of his sentencing trial for aggravated robbery.

Mendoza fled the convenience store at San Antonio Street and Spur Street on foot. New Braunfels police arrested him, and he has remained in Comal County Jail in lieu of a $100,000 bond.

A jury of eight women and five men is tasked with deciding the appropriate punishment in the 274th District Court of Judge Gary Steel. Mendoza faces from five to 99 years in prison.

Tears sprang to Mendoza’s eyes as he recalled the day he robbed Garcia.

“It was pretty much a spur of the moment thing...” he said. “The day of the robbery, I don’t remember a lot of it ... I knew that no one was going to know if ... (the gun) was loaded or not. I wasn’t going in there to harm her; I was just going in for my own selfish reasons.

“I never even thought I would do something like that.”

“When I got on probation, I was only in jail for one day,” Mendoza said. “I believe a person needs to be completely sober and thinking about what they’re going to do with their future ... I didn’t feel I was punished enough for what I did to be back out there and succeed on probation.”

Mendoza said he had time to change his ways.

“I’ve really thought about my actions and what I would do ... (if I was put on probation)...” he said. “I take full responsibility for my actions ... I’ve done some serious thinking.”

Brandon Mendoza’s mom, Brenda Mendoza, said he was diagnosed with cerebral palsy at a young age.

“He was in all special education classes throughout school...” she said. “There’s a point that he understands things, just to a point though. It was not normal compared to other children.”

Both Assistant District Attorney Steve De Lemos and Defense Attorney Joseph Garcia III said they would close and rest their cases today at 9 a.m.
Posted by Sam at 6:43 AM