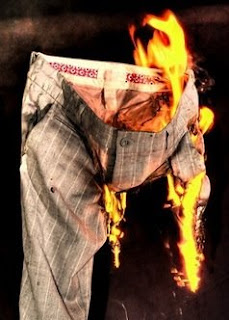 Man Australians have all the fun.

As the song says:

"Do you come from a land down under?
Where women glow and men plunder?
[I guess that should now be where men glow]
Can't you hear, can't you hear the thunder?
You better run, you better take cover."

SYDNEY — A man whose relatives say had been sniffing gasoline burst into flames after a police officer Tasered him as he ran at officials carrying a container of fuel, police said Tuesday.

The man, identified by his family as 36-year-old Ronald Mitchell, was in critical condition at a Perth hospital in Western Australia state following Monday's incident in Warburton, an Aboriginal community 950 miles northeast of Perth.

Western Australia police said they were responding to a complaint at a house when Mitchell ran outside the house carrying a cigarette lighter and a large plastic bottle containing what they believe was fuel. When he refused to stop running toward them, one officer Tasered him, police said in a media release.

The man was immediately engulfed in flames. The officer threw him to the ground and smothered the blaze with his hands, the statement said. Mitchell was charged with assault to prevent arrest and possession of a sniffing substance.

An 18-year-old woman threw rocks at the officer as he tried to help, and he was later treated for a cut on his head and burns to his hands, police said.

The woman was charged with two counts of assaulting an officer, police Sgt. Graham Clifford said. Two others at the house were charged with possessing a sniffing substance.

Mitchell's sister, Morinda West, told The Australian newspaper that her brother had been sniffing gasoline and that when he ran out of the house he was carrying a lighter and an orange juice container full of gasoline.

Police spokeswoman Susan Usher said Mitchell appeared to have received third-degree burns to about ten percent of his body.

The officer who Tasered Mitchell was not suspended, Clifford said.