Good Bye Henry, the World is grateful for you having been here, Rest in Peace 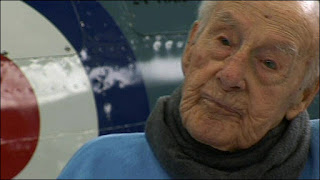 What a life this man led.

Born in the 19th Century, lived through the 20 th Century and died in the 21st Century!

When he was born their were pretty much no cars, there were no radio, no airplanes, no antibiotics, and no computers, just to name a few.

He lived to "see" the Wright Brothers fly and saw Neil Armstrong walk on the moon.

He truly had a full and rich life. I salute you, Sir and thank you for all you did for all of us. God rest your soul and may you rest in peace.

The world's oldest man and one of the last surviving World War I servicemen, has died at the age of 113.

Henry Allingham served with the Royal Naval Air Service during the Great War, later transferring to the Royal Air Force and serving at Ypres.

'Everybody at St Dunstan's is saddened by Henry's loss and our sympathy goes out to his family,' said Robert Leader of St Dunstan's care home in near Brighton, East Sussex. Mr Leader said: 'He was very active right up to his final days, having recently celebrated his 113th birthday on HMS President surrounded by family.

'As well as possessing a great spirit of fun, he represented the last of a generation who gave a very great deal for us.

'Henry made many friends among the residents and staff at St Dunstan's. He was a great character and will be missed.'

A funeral will take place later this month at St Nicholas' Church in Brighton. He joined the Royal Naval Air Service in September 1915 before transferring to the RAF in April 1918 and was the last survivor of the Battle of Jutland.

The oldest surviving member of the Armed Forces held a clutch of honours, including the British War Medal, Victory Medal and the Legion d'Honneur - the highest military accolade awarded by France. Young love: Mr Allingham pictured with fiancee Dorothy May in 1916. The couple were married for more than 50 years

His grandson, Tim Gray, described him in recent years as 'unbelievable'.

He said: 'He is a really incredible man with a great sense of humour.'

He once said he thought joining the war effort would be an adventure, not realising what it meant.

He was initially persuaded to remain at home by his mother.

'War's stupid,' he told the BBC. 'Nobody wins. You might as well talk first, you have to talk last anyway.' Hero: Allingham held a clutch of honours, including the British War Medal, Victory Medal and the Legion d'Honneur

In September 1915, following his mother's death, he joined the Royal Navy Air Service (RNAS) and was sent to France, maintaining seaplanes.

Enthusiastic to play his part, pilots would take him flying and he would take the role of a spotter or a bomber.

In late 1917, Mr Allingham was posted to an aircraft depot in Dunkirk and became a member of the Royal Air Force following the merger of the RNAS and the Royal Flying Corps.

The great-grandfather was the last founder member of the RAF and the only remaining survivor of the infamous Battle of Jutland off the Danish coast in 1916.

He had a miraculous escape from his ship, the Kingfisher, when a German shell heading directly for it bounced over the top.

He described to the Daily Mail how he remained haunted by scenes from the third battle of Ypres.

'They would just stand there in two feet of water in mud-filled trenches, waiting to go forward,' he said.

'They knew what was coming. It was pathetic to see those men like that.

'In many ways I don't think they have ever got the admiration and respect they deserved.'

He was also shot in the arm, telling the newspaper: 'The bullet passed through my arm and out the other side. 'They just bandaged me up and sent me out again. It's so long ago that the scar has gone.'

In 1919 he left the air force after service at Cologne as part of the Army of Occupation.

He was married to his late wife Dorothy for more than half a century.

During the Second World War, Mr Allingham's engineering skills were vital to designing counter measures to the Germans' magnetic mines.

In 1941, he helped defuse the mines that had been used to blockade Harwich harbour.

Mr Allingham told the BBC: 'Like so many, I have tried to forget my time in the war.

'In the last few years I have met other veterans, and we never spoke one word of the war, not one.' Mr Allingham lays a wreath at the Air Services Memorial, in St.Omer, France, during an Armistice Day Service in 2005

Asked about his longevity, he said: 'I don't know if there is a secret, but keeping within your capacity is vital.

'I've had two major breakdowns, one during the war and one after but both when I was trying to do the work of three men.

'The trick is to look after yourself and always know your limitations.'

In 2006 Mr Allingham joined thousands who gathered to remember one of the most bitterly contested and bloodiest conflicts - the Battle of the Somme.

The same year saw him set foot on German soil for the first time in more than 85 years, meeting 109-year-old counterpart Robert Meier.

In the Ruhr industrial heartland of Germany, the wartime foes cast aside their wheelchairs to embrace as friends. Speaking through interpreters, they discovered that for more than a year they were both at the Somme.

Mr Allingham grasped his new friend's hand, saying: 'My very best wishes, and may you have a long life still.'

Later, wheeled to a war memorial, both men forced themselves from their chairs to pay their respects.

Grasping a poppy wreath, frail Mr Allingham paused before settling back into his chair, his thoughts with the comrades who never returned. Emotional moment: A tear is wiped away from Mr Allingham's eye at a service to mark the 90th anniversary of the Great War Armistice

Expressing regret at not being able to grasp the native tongue, he quipped: 'It's too late for me to start thinking about learning German now.'

Mr Allingham celebrated his 110th birthday with a flypast, joined at the Grand Hotel in Eastbourne by family and then Chancellor Gordon Brown, who gave him a letter from the Queen, a bottle of whisky and a copy of the Budget statement from the year he was born.

Mr Allingham was living at St Dunstan's care home for ex-servicemen and women near Brighton.

He watched from the hotel balcony as two RAF Tornado aircraft from 31 Squadron at RAF Marham flew past. Afterwards he raised a toast to the Queen.

Squadron Leader Jim Pruden, from RAF Innsworth, said: 'For us, Henry is an inspiration. 'He inspires countless veterans who are younger than him but also those who are looking at a future in the Armed Forces.

'We are very proud of our links with him. The least we could do was to offer the flypast, both in recognition of who he is but also what he has achieved.'

He celebrated his 111th birthday on board the Royal Navy's oldest warship, Lord Nelson's flagship HMS Victory, at Portsmouth, Hampshire.

A military flypast of aircraft from the Royal Navy's historic flight and the RAF marked the celebrations.

The Second Sea Lord, Vice Admiral Adrian Johns, and Veterans' Minister Derek Twigg were among dignitaries to share a celebratory lunch with him in the ship's Great Cabin.

Asked how it felt to be turning 111, Mr Allingham said: 'I'm pleased to be seeing another tomorrow. Another flypast was organised for his 112th birthday, this time by a Lancaster bomber flanked by two Spitfires.

In September 2008, aged 112, he launched his autobiography at the RAF Club in London's Piccadilly - a place close to his heart as he had been a member of the force when it was founded in 1918.

He was joined by family, close friends and the co-author of the book, Dennis Goodwin, who is also founder of the First World War Veterans' Association.

Paying tribute to his old friend, Mr Goodwin said Mr Allingham was a recluse when he first met him.

'I think he has done so well to now because the more you engage people and focus attention on them, the more they develop a will to live,' he said.

'And that's the case with Henry. If he had been allowed to vegetate he would have disintegrated.'

Mr Goodwin, who was a close friend of Mr Allingham, said he was one of an 'extremely unique and special generation of people'. 'Not only did they survive the most horrific war of humanity but they had a new life to begin afterwards in an era of depression, and they did it admirably.

Mr Allingham left a legacy of memories to the nation, one of his friends said today.

Mr Goodwin told BBC News that Mr Allingham's longevity could be put down to his being 'essentially his own man'.

Helen Emmerson, the manager of the care home where he spent his last years, said he had been determined to tell the world about his experiences despite his age.

She said: 'I think particularly over the last six to nine months definitely he was finding it more and more difficult due to his advancing age.

She told Sky News: 'He was tireless in his effort to get the word out there.'

Mr Goodwin, who was a regular visitor to Mr Allingham at St Dunstan's, described him as 'an exceptionally good friend'.

He added: 'He was almost a surrogate father to me, we shared life together.'

Describing the last few months of his life, he said: 'He wasn't in the best of health. He wasn't eating. Three British veterans of World War II: Harry Patch, of the Duke of Cornwall's Light Infantry (left), William Stine (centre) of the Royal Navy and Mr Allingham (right), at a reception for British military veterans in 2006

'He often said to me he'd love to eat something good and have a drink like the old times but his tastebuds had gone, and I think it really frustrated him.'

Mr Patch, known as the Last Tommy, is Britain's last living soldier to have fought in the mud-soaked battle of Passchendaele in 1917 in which more than 70,000 British troops died.

He served as Lewis gunner with the 7th Duke of Cornwall's Light Infantry and now lives at a residential home in Somerset.

A third known Great War survivor, Claude Choules, 108, who served with the Royal Navy, now lives in Australia. He born in Worcestershire.

Read more: http://www.dailymail.co.uk/news/article-1200516/Goodbye-hero-World-War-I-veteran-worlds-oldest-man-dies-aged-113.html#ixzz0LcXZNJMu
Posted by Sam at 9:18 AM