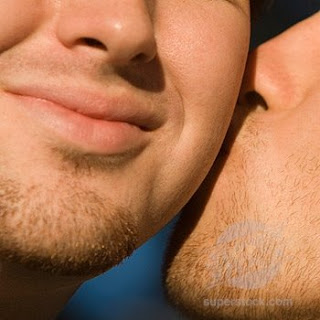 It sounds like my old high school and its ban on PDA's (public displays of affection) not personal digital assistants.

I went to high school during the Pleistocene, before such things existed.

SALT LAKE CITY – A gay couple say they were detained by security guards on a plaza owned by the Mormon church and later cited by police, claiming it stemmed from a kiss on the cheek.

The Church of Jesus Christ of Latter-day Saints said that the men became argumentative and refused to leave after being asked to stop their "inappropriate behavior." The men say they were targeted because they are gay.

Matt Aune said he and his partner, Derek Jones, were walking home from a concert nearby on Thursday night, cutting through the plaza near the Salt Lake City Mormon temple.

Aune, 28, said he gave Jones, 25, a hug and kiss and that the two were then approached by a security guard, who asked them to leave, telling them they were being inappropriate and that public displays of affection aren't allowed on the property. He said other guards arrived and the men were handcuffed.

"We asked what we were doing wrong," Aune told The Associated Press.

Church spokeswoman Kim Farah said in a statement Friday that the men were "politely asked to stop engaging in inappropriate behavior — just as any other couple would have been."

"They became argumentative and used profanity and refused to leave the property," she said. The church did not immediately respond to a request for more comment.

The church has been the target of protests over its support of a ban on gay marriage in California.