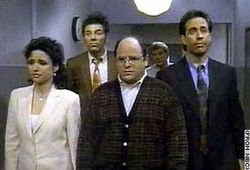 Well you gave it your best shot Suzanne, but the "Seinfeld defense" of no affirmative duty to stop a crime, here stopping the guy from killing the other wasn't going to work here.

A Bexar County jury returned a guilty verdict Friday afternoon in the trial of a 22-year-old accused of using a baseball bat to fatally bludgeon a West Side video store owner.

It took the jury about four hours to find Christopher Rosales guilty of murder. State District Judge Ron Rangel is scheduled to decide his punishment Monday afternoon. Rosales faces up to life in prison.

Defense attorney Suzanne Kramer acknowledged during closing arguments Friday that Rosales was present when 66-year-old John Florez was killed, but she blamed co-defendant Matthew Gravlin for the death. Gravlin remains in the Bexar County Jail awaiting his own trial on a murder charge in connection with Florez's slaying.

“If you're standing by and somebody is killing someone, you don't have a legal duty to stop it,” Kramer said. “Just because Christopher Rosales himself feels personally responsible doesn't mean he's legally responsible.”

Rosales confessed to killing the store owner a few days after police found Florez's badly beaten and partially disrobed body June 22, 2007, inside Videos Mexicanos on Ruiz Street, where the defendant sometimes lived and worked. But Rosales retracted his statements, blaming Gravlin after officers told him that his 20-year-old accomplice had also admitted to the crime.

Also Friday, Rosales' defense attorneys attempted to portray Florez as “a predator of young, homeless, destitute men.” Kramer said Florez's death was most likely the result of an “instantaneous killing” that occurred when Gravlin snapped after being sexually harassed.

But prosecutors said Rosales was much more involved than his attorneys would like jurors to believe. Rosales admitted taking money from the store after Florez was killed and two women testified that he admitted to killing the storeowner, they reminded jurors.

Nobody but Rosales and Gravlin will ever know for sure what the motive was, said Assistant District Attorney Miguel Najera. But, he said it was obvious Rosales was the one in charge.

“(Rosales) was the angry one,” Najera said. “He was the leader. He was the one who told people beforehand that he was going to kill his boss. He's the one with all the motives to kill John Florez.”

In the end, Najera said, the motive is irrelevant.

“What matters is that he did it,” he said. “It was the defendant who chose to act out of anger and take a life.”