The face of crime 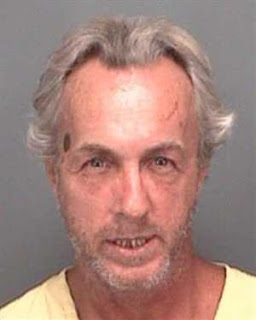 Does this man look even remotely sane?

I didn't think so either.

LARGO — When police arrested Richard Harvey Warren on Thursday night on an accusation of stealing bologna from a local convenience store, it wasn't the Largo man's first brush with the law.

Or even his second, third or fourth.

Through the years, he has been charged with everything from shoplifting and disorderly intoxication to indecent exposure. The majority of charges brought against Warren have been misdemeanors, but there have been a handful of felony charges, including ones for grand larceny and battery on an officer.

He remained in the Pinellas County Jail on Friday in lieu of $2,625 bail.

According to Largo police, Warren entered the Sunshine Food Mart at 1595 Seminole Blvd. on Thursday night and concealed a $2.99 pack of bologna in his pants. When a merchant attempted to stop Warren from leaving, he grabbed the person's shirt and hands and attempted to walk away.

Before Thursday, Warren had not been arrested in 15 months.