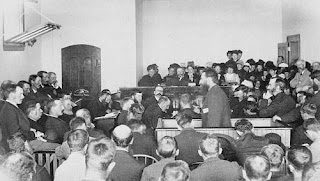 Doh! Trust the paper to screw up a quote.

I am sure Martin said probation and not parole.

Brandon Angel Mendoza pleaded guilty Monday to an aggravated robbery committed around June 8 of last year. Since that time he has been incarcerated at Comal County Jail, held on $100,000 bail.

In June of 2008 Mendoza attempted to rob Selistina Garcia and threatened her life with a firearm, elevating the charge of the robbery to a first-degree felony.

Just as soon as the jury was selected and seated, Mendoza pleaded guilty. The jury is now tasked by Judge Gary T. Steel to proscribe appropriate punishment on Mendoza, which could fall anywhere between 5 to 99 years.

“If the jury assesses 10 or less they could recommend parole,” Court Administrator Martin Allen said. “Or anywhere from 10 years and a day to life he couldn’t get parole.” Assistant District Attorney Steven DeLemos said of the guilty plea “it’s really a roll of the dice for him.” (SUBSTITUTE THE WORD PROBATION FOR PAROLE)
This case represents one of several aggravated robbery incidents to hit the area over the past year, according to DeLemos.

“As far as I know this is the first one that has gone to trial so far.”

The sentencing will begin at 9 a.m. this morning at the Comal County Courthouse.
Posted by Sam at 6:13 AM