The most transparent Administration evah!! 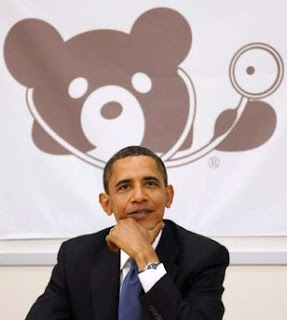 The Obama administration is delaying release of a congressionally mandated report on the nation's economic conditions, spawning speculation that it is trying to tamp down bad economic news to avoid further complicating the already fraught legislative debate over health care reform.

The report, which is normally published by late July, is being delayed by several weeks, the administration acknowledged on Monday. Officials said the hold-up is not unusual in presidential transition years, noting that Presidents George W. Bush and former President Bill Clinton each published their initial budget updates weeks late.

"Because of the unique circumstances of a transition year, we -- like President George W. Bush in 2001 -- are releasing the mid-session review a few weeks later than as is usual in non-transition years," Kenneth S. Baer, communications director for the Office of Management and Budget, said Monday.

Asked about the speculation that the delay is linked to the ongoing health care debate, Baer responded: "I don't deal in speculation. What I know is that in transition years past both the full budgets and Mid-Session Reviews have come out later than in non-transition years and this year will be no different."

The report, which takes the measure of economic growth, job creation and budget deficits, will update assumptions that undergirded the administration's budget for next year. And while many economists say the deep recession gripping the nation is slowly easing, the administration's update is nonetheless expected to be filled with dire economic news. Many private forecasters already are predicting that unemployment, which is now at 9.5 percent nationally, will peak in double figures sometime next year.

Caught off-guard by the severity of the economic situation it inherited, the administration has badly underestimated how much unemployment would rise even with its $787 billion economic stimulus plan in place. Those missed projections have led some critics to question the credibility of the administration's economic forecasts and given pause to legislators considering sweeping proposals such as health care reform and cap-and-trade legislation that Obama calls essential to future economic growth and stability.

"The last time the president made grand promises and demanded passage of a bill before it could be reviewed, we ended up with the colossal stimulus failure and unemployment near 10 percent," said Sen. Jim DeMint (R-S.C.). "Now the president wants Americans to trust him again, but he can't back up the utopian promises he's making about a government takeover of health care. He insists his health care plan won't add to our nation's deficit despite the nonpartisan Congressional Budget Office saying exactly the opposite. And today we learn that the president is refusing to release a critical report on the state of our economy, which contains facts essential to this debate. What is he hiding?"