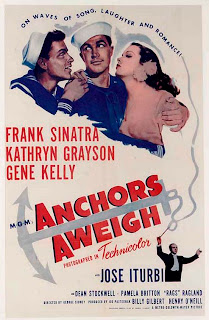 Wow, this is strange.

FishbowlDC obtained a copy of the July 22, 2009 letter addressed to Miami Herald Senior VP and Executive Editor Anders Gyllenhaal. In the complaint, Gordon calls for a "thorough investigation" to put an end to Rosenberg's "appalling behavior" that includes comments about the Commander's sexual orientation.

The complaint outlines examples of Rosenberg's alleged "abusive and degrading, comments of an explicitly sexual nature."

To me, in front of another journalist with reference to why 9/11 co-defendant Mustafa Al Hawsawi was seated on a pillow in court:

Rosenberg, to CNN's Jamie McIntyre in front of roughly 15 journalists in the Guantanamo Commission's press center:

To Jamie - "Aren't you in the BOQ (Bachelor Officers Quarters)? I didn't think you were in tent city because these people (military public affairs escorts) are so far up your ass that I figured you must be in the BOQ."

To Me [Gordon] - "Why isn't he in the BOQ? You're kissing his ass so much that I can't believe that you're letting him stay with the rest of us. Do you love him?"

The Commander claims that Rosenberg said to members of the press and enlisted military men and women: "Seeing him [Gordon] topless in tent city was the most repulsive sight I've ever seen in my life." Most recently, while walking to court, Gordon says that Rosenberg obstructed an AP pool photographer from taking his picture, saying "Well, I know you like to have your picture taken to show people you are actually working down here, but guess what, not today..."

Gordon, who also serves as the Pentagon Spokesman for Western Hemisphere and Guantanamo issues also accuses Rosenberg of "bullying" reporters from various outlets including New York Times, Washington Post, CNN, Fox News, CBC, Der Siegel and Al Jazeera. He claims that over the years, Rosenberg has labeled her peers in the press and Gordon's colleagues "bitches," "stupid," "lazy," "incompetent," "Nazis," and "Saddam Hussein-like."

*The Miami Herald was not available for comment when FishbowlDC contacted them. We'll continue to update as this story unfolds.
Posted by Sam at 7:26 AM