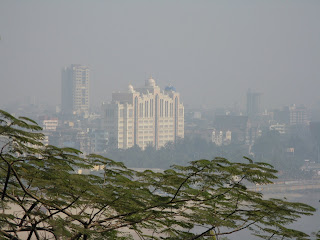 We "pass" cap and trade legislation (still pending in the Senate) which will further hinder our economy and raise our costs tremendously and India will do nothing?

How much will this shrink the total carbon "footprint" then?

Sounds like a good time to just say No.

By James Lamont in New Delhi, Joshua Chaffin in Are and Fiona Harvey in London

A split between rich and poor nations in the run-up to climate-change talks widened on Thursday.

He dismissed scientists’ predictions that Himalayan glaciers might disappear within 40 years as a result of global warming.

“We have to get out of the preconceived notion, which is based on western media, and invest our scientific research and other capacities to study Himalayan atmosphere,” he said.

“Science has its limitation. You cannot substitute the knowledge that has been gained by the people living in cold deserts through everyday experience.”

Mr Ramesh was also clear that India would not take on targets to cut its emissions, even though developed countries are asking only for curbs in the growth of emissions, rather than absolute cuts.

His stance was at wide variance with that of Andreas Carlgren, his Swedish counterpart. Sweden holds the European Union’s revolving presidency until a conference in Copenhagen in December at which governments will try to hammer out a successor to the Kyoto protocol on curbing greenhouse emissions – the main provisions of which expire in 2012.

Mr Carlgren said in Are, Sweden, that developing countries such as India, China and Brazil must propose more ambitious plans to reduce emissions if they were to receive finance from wealthy nations.

Rich and poor countries have been squabbling over the issue of financing for months, imperilling the outcome of the Copenhagen talks. Rich countries have not agreed to provide the funding that poor nations say is necessary to help them cut their emissions and adapt to the effects of climate change.

Mr Carlgren went on the offensive on Thursday, saying poorer countries must come up with firm plans to cut emissions before financing will be forthcoming.

States such as China and India have produced plans for curbing the growth in their emissions but these have not been formalised within the negotiating process.

Mr Carlgren also criticised rich countries for failing to agree to cut their emissions by the amounts needed. “So far, what we have seen from other countries is too low. We expect more from developed countries,” he said.

But the Swedish environment minister said poor countries must also do more to forge an agreement. “We are prepared to put money on the table. But it should also be said that if we don’t see significant reductions that will really deviate from business as usual . . . then there is no money,” Mr Carlgren said, singling out China, India, Brazil, South Africa and Indonesia. “We are also prepared to deliver financing, but we must see that there is something to pay for.”

India has taken the hardest line in the negotiations so far. Along with China, India refused at the meeting of the Group of Eight industrialised nations this month to sign up to a target of cutting global emissions by half by 2050. The countries were holding out to gain concessions from the west on financing.

The claims from Mr Ramesh that Western science was wrong on the question of melting Himalayan glaciers appeared to reinforce Delhi’s recalcitrant stance.

Mr Ramesh on Friday reiterated that India would not accept emissions caps to held curb global warming, Bloomberg reported. “The world has nothing to fear from India’s development ... An artifical cap is not desirable and not even necessary as we haven’t been responsible for emissions in the first place,” he said.

Earlier this week, he also challenged Hillary Clinton, US secretary of state, over her appeal to India to embrace a low-carbon future and not repeat the mistakes of the developed world in seeking fast industrialisation.

The consequences of depleted glaciers – sensitive to rising temperature and humidity – would be dire.

Seven of the world’s greatest rivers , including the Ganges and the Yangtze, are fed by the glaciers of the Himalayas and Tibet. They supply water to about 40 per cent of the world’s population.

Water supply is likely to become an increasing national security priority for both India and China as they seek to maintain high economic growth rates and sustain large populations dependent on farming. Some scientists have warned that rivers such as the Ganges, Indus and Brahmaputra could become seasonal rivers as a result of global warming.

Indians are also fearful of weakening monsoon rains. Some parts of India, including Delhi, the capital, are still waiting anxiously for this year’s rains to come in earnest. A late, or a poor, monsoon would be a drag on economic growth.

Achim Steiner, executive director of the UN Environment Programme, has described melting glaciers as a “canary in the climate-change coal mine”, warning that billions of people depend on these natural water storage facilities for drinking water, power generation and agriculture.

Mr Ramesh said the rate of retreat of glaciers in the Himalayas varied from a “couple of centimetres a year to a couple of metres”, but that this was a natural process that had taken place occurred over the centuries. Some were, in fact, growing, he said.

The glaciers – estimated by India’s space agency to number about 15,000 – had also been affected by debris and the large number of tourists, he said.