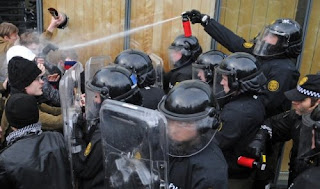 What was he doing?

What were the police doing? The news report says at least six police cars "peppered" three parking lots. What the heck does that mean?

Were they shooting their guns? Were they spraying pepper spray? WTH??

Police nabbed an Austin man after a shot rang out Wednesday afternoon in front of a New Braunfels pawn shop.

James Smith, 32, remained in Comal County Jail. His bond was not set as of Wednesday evening.

Pawn shop supervisor Freddy Garza said he feared the worst when he heard the gunshot.

“I saw him shoot a 9 mm .40 caliber in his vehicle,” Garza said. “I didn’t know if he was just parked there, or if he was going to knock over the store ... I rallied everyone up and told them to stay away from the doors and not to leave.”

New Braunfels resident George Detreville was walking in the area with a friend when the shots were fired.

“We were just walking to the store and all of the sudden, ‘Pow!’ Detreville said. “It was scary, man ... gunshots are not something you’d expect to see in New Braunfels.”

The situation was scary for Garza, too.

“I was worried,” he said. “I looked out the door; and when I saw the gun, I kind of freaked out.”

A girl in the pawn shop ran outside to the Ford Expedition from which the shots rang out, Garza said.

The driver then threw the car into reverse and backed into part of the building, splintering a pole and knocking some of the merchandise outside, Garza said.

The driver ditched the vehicle in the Albertson’s parking lot across from Money Mart Pawn Shop and fled on foot, police said. Police caught up with Smith nearby and handcuffed him.

Blue and red lights flashed around the parking lots of Albertsons and the pawn shop for hours Wendesday.

Officers donned black gloves and inspected the Ford Expedition. They spent the next several hours searching the SUV and questioning the driver and others at the scene.

Police found a handgun in the front seat, which they allege Smith fired. They also pulled at least two rifle-type guns from the back of the vehicle.

Police would not comment on Smith’s prior felony. Additional charges are pending, police said.
Posted by Sam at 6:36 AM