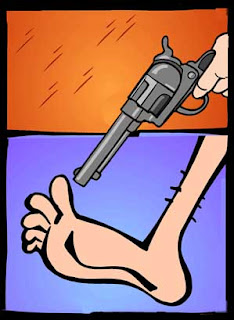 A 17 year old manages to shoot himself and the gun disappears?

What are the chances the gun was stolen from somewhere or used in a crime?

A 17-year-old accidentally shot himself in the hand and the leg Wednesday afternoon on the city's East Side, police said.

The unidentified teen was either playing with the gun or trying clear a jam when the gun discharged a single round that grazed his left pinky and hit his left thigh, authorities said.

The teen was taken to University Hospital with non-life threatening injuries, police said. He was visiting a friend in the 300 block of Vargas Alley when the incident occurred, officials said.

Police have not yet found the gun and no charges will be filed against the victim.