Careful, he'll be back! 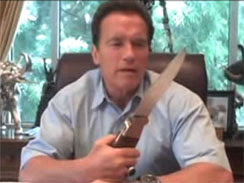 "If you don't cut the budget I will cut you", says the Governator.

Hey!? You feel lucky punk? Well, do you?

California Governor Arnold Schwarzenegger defended a video on his Twitter page which shows him brandishing a huge hunting knife as he talks about the state's budget crisis.

Schwarzenegger, under fire for a budget plan announced this week that will see 15 billion dollars in spending cuts from services such as education and health care, said the light-hearted video was intended as a bit of fun.

The movie-star-turned-politician brushed off suggestions from reporters in Sacramento that the video might be viewed by some as being insensitive.

"Not that I have fun with making the cuts; they sadden me. But fun with the job itself, because I think it is the most rewarding job that I've ever done, even though with a huge responsibility.

"So just relax and have a little bit of a sense of humor."

California lawmakers are set to approve the spendings at a vote on Thursday which will pass a budget aimed at closing the state's 26.3 billion-dollar deficit.