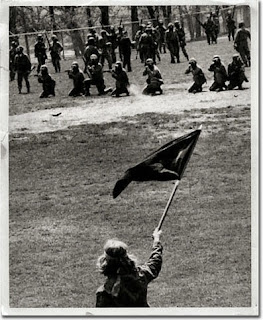 Send in the Army as peacekeepers?

What could possibly go wrong?

At least eight people were killed and some two dozen others were wounded over the weekend. Four of the victims lost their lives during a bloody six hours late Saturday and early Sunday.

Four of the victims lost their lives and at least 22 were wounded during a bloody six hours late Saturday and early Sunday, including an 8-year-old boy.

Violence was reported in every part of the city – with shootings and stabbings on the North, South and West sides.

The violence began with a stabbing at 9:55 p.m. Saturday, when a 26-year-old man was stabbed multiple times in the armpit near 71st Street and Vernon Avenue in the Park Manor neighborhood. He was taken to Stroger Hospital of Cook County in critical condition. A suspect is in custody, police said.

On the opposite side of the city around 11:45 p.m. Saturday, a 19-year-old was shot in the buttocks at 6549 N. Lakewood Ave., in Rogers Park just west of the Loyola University Lake Shore campus. He was taken to Saint Francis Hospital in Evanston in an unidentified condition, police said.

Three minutes later, a man was fatally stabbed in the chest -- reportedly by his sister -- at his home at 4351 S. Champlain Ave. in the Bronzeville neighborhood. Andre Armstrong, 35, was pronounced dead at 12:30 a.m. Sunday at Stroger Hospital, according to the Cook County Medical Examiner's office.

The man who died was identified as Marchello Henderson, of 10446 S. Wabash Ave. He was pronounced dead at 12:30 a.m. Sunday at Stroger Hospital, according to the a representative from the medical examiner's office, who said Henderson was shot multiple times.

At 12:29 a.m. Sunday, a man walked into Roseland Community Hospital and was treated for a gunshot wound to the abdomen, police said. It was not immediately clear where the shooting occurred, but Calumet District police prepared the report on the Far South Side.

About 12:50 a.m. Sunday, a 40-year-old man was shot three times -- twice in the groin and once in the leg -- during a possibly domestic-related incident at 8127 S. Coles Ave. in the South Chicago neighborhood, police said.

At 12:57 a.m. Sunday, a 19-year-old man walked into South Shore Hospital and was treated for a gunshot wound to the hip, according to police. An address of the shooting was not immediately available.

At 1:12 a.m. Sunday, four males and a female were shot at 2852 W. Polk St. in the North Lawndale neighborhood. Three of the victims were taken to Mount Sinai Hospital and two were taken to Stroger Hospital, police said.

Two men died after they were shot about 1:45 a.m. near 63rd Street and Maryland Avenue in the Woodlawn neighborhood. Loweton Harmon, 26, of 9131 S. Parnell Ave., and Leundra Phillip, 22, of 10 Penn Oaks Dr. in North Liberty, Iowa, were both pronounced dead at 3 a.m. Sunday at University of Chicago Hospitals, according to the medical examiner's office.

At 1:50 a.m., a man was shot in the head in the 6400 block of South Sangamon Street in the Englewood neighborhood, and two others with him may also have been shot, police said.

About 2:25 a.m., a man in his 30s was stabbed in the abdomen area during a fight in the 4300 block of West Shakespeare Avenue in the , police News Affairs Officer Michael Fitzpatrick said. The man was taken to Advocate Illinois Masonic Medical Center in an unidentified condition.

A man in his 20s was critically wounded in a drive-by shooting in the 4700 block of West Jackson Boulevard in the West Garfield Park neighborhood about 2:40 a.m. Sunday. The man was taken to Mount Sinai in critical condition, Fitzpatrick said.

At 2:54 a.m., a 21-year-old man was shot in the neck at 5958 S. Honore St. in the West Englewood neighborhood. The man was taken to Advocate Christ Medical Center in an unidentified condition, police said.

At 3:42 a.m., two males were shot at 735 N. Harding Ave., also in West Garfield Park. One suffered a gunshot wound to the foot and was taken to an unidentified hospital and the second person later showed up at Stroger Hospital in an unidentified condition, according to police.

Casualties Double On Sunday
The violence cooled down after those macabre six hours expired, but the weekend bloodbath wasn't over. Before it ended, the number of homicide victims had doubled.

A man was shot dead in broad daylight Sunday in the Kenwood neighborhood. Police responded about 10:15 a.m. to a shooting in the 4700 block of Forrestville Avenue and found a man wounded in the street, according to police News Affairs Officer JoAnn Taylor.

Police said the man was taken to Stroger Hospital of Cook County, where he was pronounced dead.

In another daylight attack, one man was killed and another injured in the Back of the Yards neighborhood.

The shooting happened in the 4700 block of South Paulina Street about 11:40 a.m., according to police News Affairs Officer Robert Perez. Francisco Lopez, 29, who lived on the block, was pronounced dead at 12:18 p.m. Sunday at Stroger Hospital, and another person was taken to the scene with minor injuries.

The violence continued on Sunday night, when Cleophus Parrow, 35, was shot at 504 E. 91st Pl. in the Burnside neighborhood.

One person is in custody for the murder of a man who was fatally shot Sunday night in the South Side Burnside neighborhood. He was shot around 9:30 p.m. and pronounced dead about an hour later.

The victim was on his porch when a person came up and shot him, then fled. One person is in custody and a weapon was recovered, police News Affairs said.