For sale, everything goes 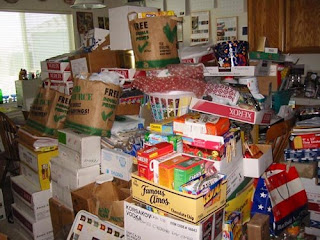 Wow, this is just very sad. How much stuff did she have in there for them to take sevral visits and cleaning out her stuff before she was found?

The body of an elderly shopaholic was found underneath a pile of clothing and other items after she died of natural causes, an inquest heard.

Joan Cunnane's bungalow was so crammed with purchases it took five visits to the house before she was found.

She had refused to let her friends into the house in Heaton Mersey, Stockport Magistrates' Court was told.

Her friend Roy Moran said the 77-year-old started shopping to escape youths who once plagued her home.

Mr Moran told the court: "She said it gave her pleasure to buy things, she only bought things she really liked."

Mr Moran last saw his friend on Christmas Day 2008 when they had lunch together.

He visited her bungalow in Rosgill Close four days later and found the side door ajar, but the premises was stacked from floor to ceiling with "bric-a-brac".

"He couldn't see her anywhere and got no response," said coroner John Pollard.

Concerned neighbours called police on 6 January but the first search of her bungalow was unsuccessful because of "the large amount of personal property and papers within", Det Insp Kevin Dolan said in a statement.

Police returned the next day with a truck and a skip to clear it out and conduct a second search.

Det Insp Dolan said Ms Cunnane's body was found in a bedroom "under a substantial pile of clothing and other items".