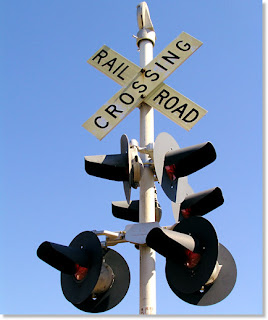 Please do not go around train barriers.

God rest her soul. My condolences to her family.

Authorities identified the victim of a Hays County train collision that killed a woman Tuesday on Centerpoint Road.

Carol Sager King, 70, died after she attempted to drive around a railroad barricade and was broad-sided by an oncoming train at around 3:30 p.m. on Centerpoint Road, according to Department of Public Safety officials in Austin.

DPS sources said King’s 2002 Buick four-door was headed westbound on Centerpoint, close to 100 yards from Interstate 35, when she maneuvered around the railroad gates and was struck by a Union Pacific train. King, a resident of San Marcos, died at the scene.
Posted by Sam at 6:03 AM